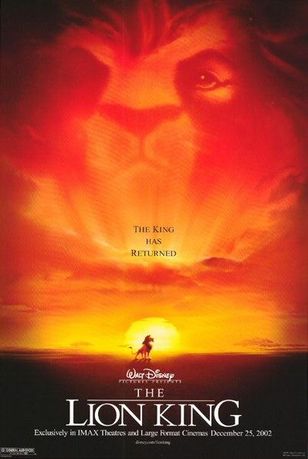 The Lion King is the 32nd animated feature in the Disney animated feature canon, and the third highest-grossing animated feature film ever released in the United States. It was produced by Walt Disney Feature Animation, originally released to selected cities by Walt Disney Pictures and Buena Vista Distribution on June 15, 1994, and put into general release on June 24, 1994. It made a short return to theaters starting from November 18, 1994, less than half a year after its initial release, with a 3-minute preview of Pocahontas. The film was later re-released with digital enhancements to giant-screen IMAX theaters on December 25, 2002.

The film focuses on a young lion in Africa named Simba, who learns of his place in the "Circle of Life" while struggling through various obstacles to become the rightful king. It is frequently alleged that The Lion King was based on Osamu Tezuka's 1960s animated series Kimba the White Lion, although many of the filmmakers deny this. The filmmakers do, however, acknowledge the prominent influences of the Shakespeare play Hamlet, the Bible stories of Joseph and Moses, and the 1942 Disney animated feature Bambi.